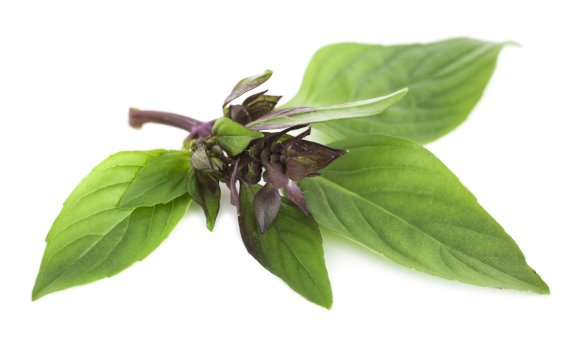 
Thai basil is a type of basil native to Southeast Asia that has been cultivated to provide distinctive traits. Widely used throughout Southeast Asia, its flavor, described as anise- and licorice-like and slightly spicy, is more stable under high or extended cooking temperatures than that of sweet basil. Thai basil has small, narrow leaves, purple stems, and pink-purple flowers. Occasionally, Thai basil may be called cinnamon basil, which is its literal name in Vietnamese, but cinnamon basil typically refers to a separate cultivar.

Sweet basil has multiple cultivars — Thai basil, O. basilicum var. thyrsiflora, is one variety. Thai basil itself has multiple cultivars. One cultivar commonly grown in the United States is 'Siam Queen'. Thai basil may sometimes be called anise basil or licorice basil, in reference to its anise- and licorice-like scent and taste, but it is different from the Western strains bearing these same names. The genus name Ocimum is derived from the Greek word meaning "to smell", which is appropriate for most members of the plant family Lamiaceae, also known as the mint family. With over 40 cultivars of basil, this abundance of flavors, aromas, and colors leads to confusion when identifying specific cultivars.

Thai basil is sturdy and compact, growing up to 45 cm (1.48 ft), and has shiny green, slightly serrated, narrow leaves with a sweet, anise-like scent and hints of licorice, along with a slight spiciness lacking in sweet basil. Thai basil has a purple stem, and like other plants in the mint family, the stem is square. Its leaves are opposite and decussate. As implied by its scientific name, Thai basil flowers in the form of a thyrse. The inflorescence is purple, and the flowers when open are pink.

Thai basil is a tender perennial but is typically grown as an annual. As a tropical plant, Thai basil is hardy only in very warm climates where there is no chance of frost. It is generally hardy to USDA plant hardiness zone 10. Thai basil, which can be grown from seed or cuttings, requires fertile, well-draining soil with a pH ranging from 6.5 to 7.5 and 6 to 8 hours of full sunlight per day. The flowers should be pinched to prevent the leaves from becoming bitter. Thai basil can be repeatedly harvested by taking a few leaves at a time and should be harvested periodically to encourage regrowth.