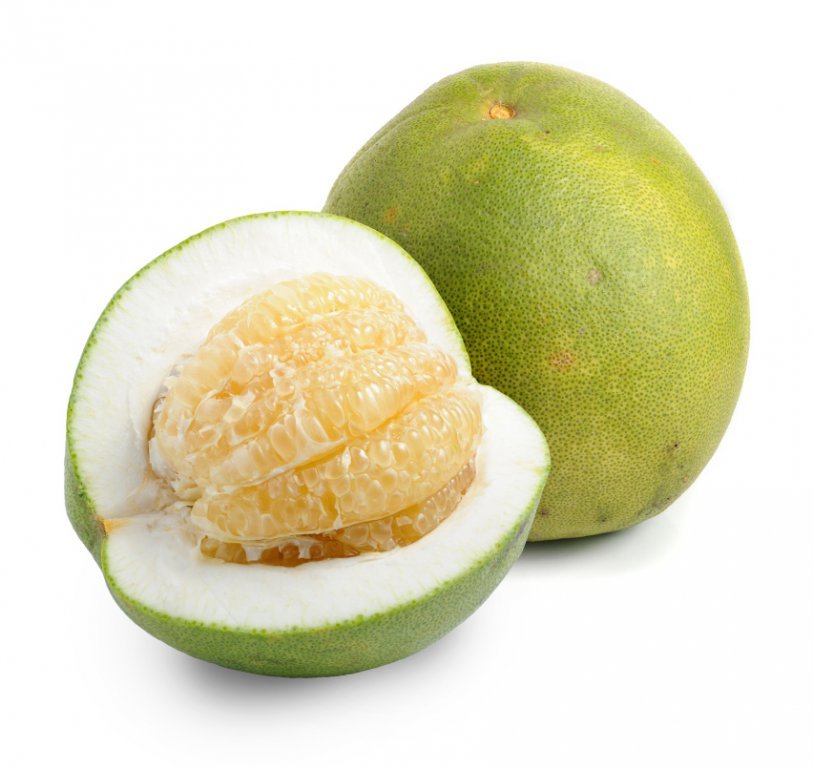 
The pomelo is a natural (non-hybrid) citrus fruit, similar in appearance to a large grapefruit, native to South and Southeast Asia. The pomelo is one of the original citrus species from which the rest of cultivated citrus hybridized. The word "pomelo" has become the more common name, although "pomelo" has historically been used for grapefruit. (The 1973 printing of the American Heritage Dictionary, for example, gives grapefruit as the only meaning of "pomelo".)

After a Captain Shaddock of an East India Company ship introduced it to Barbados, the fruit was called "shaddock" in English. From there the name spread to Jamaica in 1696. It remains a common name for the fruit among English authors. The etymology of the word "pomelo" is complex. In the Tamil language it is called "pampa limāsu", which means big citrus. The name was adopted by the Portuguese as "pomposos limões" and then by the Dutch as "pompelmoes". With some deviations, the name may be found in many European languages, for example, German (Pampelmuse), Latvian (Pampelmūze), Ido (Pompelmuso), whereas some other languages use "pomelo" (Turkish, Norwegian, Polish, Bulgarian). Another origin theory proposes that "pomelo" is an alteration of a compound of English names pomme ("apple") + melon. Citrus maxima is native to South-East Asia, where it is known under a wide variety of names. In large parts of South-East Asia, it is a popular dessert, often eaten raw and sprinkled with, or dipped in, a salt mixture. It is eaten in salads and drinks as well.

Typically, the fruit is pale green to yellow when ripe, with sweet white (or, more rarely, pink or red) flesh, and a very thick albedo (rind pith). It is a large citrus fruit, 15–25 centimetres (5.9–9.8 in) in diameter, usually weighing 1–2 kilograms (2.2–4.4 lb). Leaf petioles are distinctly winged. The fruit tastes like a sweet, mild grapefruit (believed to be a hybrid of Citrus maxima and the orange), although the typical pomelo is much larger than the grapefruit, and also has a much thicker rind. The pomelo has none, or very little, of the common grapefruit's bitterness, but the enveloping membranous material around the segments is bitter, considered inedible, and thus is usually discarded. Sometimes, the peel is used to make marmalade, may be candied, or dipped in chocolate. In Brazil, the thick skin is often used for making a sweet conserve, while the spongy pith of the rind is discarded. In Sri Lanka, it is often eaten as a dessert, either raw or sprinkled with sugar. Occasionally, some Asian fat-heavy dishes feature sliced pre-soaked pith to absorb the sauce and fat for eating. Citrus maxima is usually grafted onto other citrus rootstocks, but may be grown from seed, provided the seeds are not allowed to dry out before planting. The fruit is said to have been introduced to Japan by a Cantonese captain in the An'ei era (1772–1781). There are two varieties: a sweet kind with white flesh and a sour kind with pinkish flesh, the latter more likely to be used as an altar decoration than eaten. Pomelos often are eaten in Asia during the mid-autumn festival or mooncake festival. It is one of the ingredients of "Forbidden Fruit", a liqueur dating back to the early twentieth century that also contains honey and brandy. This liqueur is most famously used in the Dorchester cocktail.