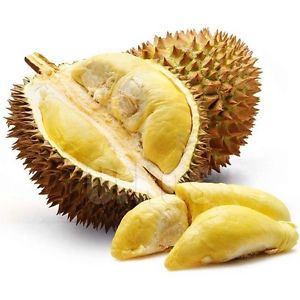 
The durian is the fruit of several tree species belonging to the genus Durio. There are 30 recognised Durio species, at least nine of which produce edible fruit, and over 300 named varieties in Thailand, 102 in Indonesia, and 100 in Malaysia. Durio zibethinus is the only species available in the international market: other species are sold in their local regions. Regarded by many people in Southeast Asia as the "king of fruits", the durian is distinctive for its large size, strong odour, and formidable thorn-covered rind. The fruit can grow as large as 30 centimetres (12 in) long and 15 centimetres (6 in) in diameter, and it typically weighs one to three kilograms (2 to 7 lb). Its shape ranges from oblong to round, the colour of its husk green to brown, and its flesh pale yellow to red, depending on the species. Some people regard the durian as having a pleasantly sweet fragrance, whereas others find the aroma overpowering with an unpleasant odour. The smell evokes reactions from deep appreciation to intense disgust, and has been described variously as rotten onions, turpentine, and raw sewage. The persistence of its odour, which may linger for several days, has led to the fruit's banishment from certain hotels and public transportation in southeast Asia. By contrast, the nineteenth-century British naturalist, Alfred Russel Wallace, described its flesh as "a rich custard highly flavoured with almonds". The flesh can be consumed at various stages of ripeness, and it is used to flavour a wide variety of savoury and sweet desserts in southeast Asian cuisines. The seeds can also be eaten when cooked.

Durian trees are large, growing to 25–50 metres (82–164 ft) in height depending on the species. The leaves are evergreen, elliptic to oblong and 10–18 centimetres (3.9–7.1 inches) long. The flowers are produced in three to thirty clusters together on large branches and directly on the trunk with each flower having a calyx (sepals) and five (rarely four or six) petals. Durian trees have one or two flowering and fruiting periods per year, although the timing varies depending on the species, cultivars, and localities. A typical durian tree can bear fruit after four or five years. The durian fruit can hang from any branch, and matures roughly three months after pollination. The fruit can grow up to 30 centimetres (12 in) long and 15 centimetres (6 in) in diameter, and typically weighs one to three kilograms (2 to 7 lb). Its shape ranges from oblong to round, the colour of its husk green to brown, and its flesh pale-yellow to red, depending on the species. Among the thirty known species of Durio, nine of them have been identified as producing edible fruits: D. zibethinus, D. dulcis, D. grandiflorus, D. graveolens, D. kutejensis, D. macrantha, D. oxleyanus and D. testudinarum. There are many species for which the fruit has never been collected or properly examined, however, so other species with edible fruit may exist. The durian is somewhat similar in appearance to the jackfruit, an unrelated species.

Raw durian is composed of 65% water, 27% carbohydrates (including 4% dietary fibre), 5% fat and 1% protein. In 100 grams, raw or fresh frozen durian provides 33% of the Daily Value (DV) of thiamin and moderate content of other B vitamins, vitamin C and the dietary mineral, manganese (15–24% DV, table).