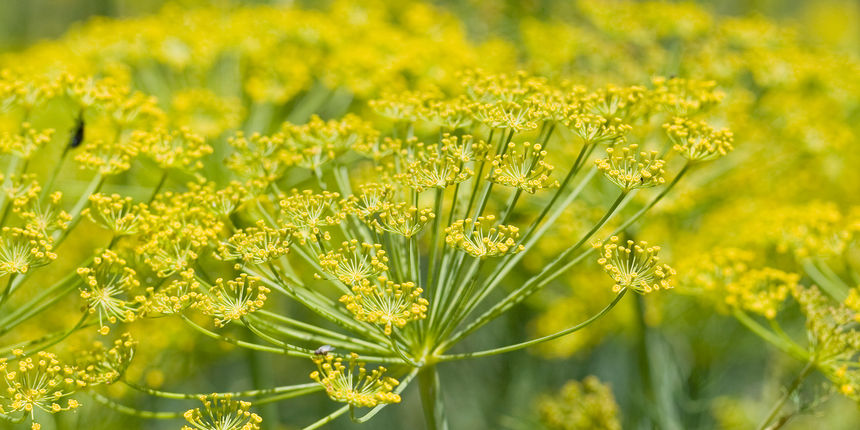 
Fennel is a flowering plant species in the carrot family. It is a hardy, perennial herb with yellow flowers and feathery leaves. It is indigenous to the shores of the Mediterranean but has become widely naturalized in many parts of the world, especially on dry soils near the sea-coast and on riverbanks. It is a highly aromatic and flavorful herb with culinary and medicinal uses and, along with the similar-tasting anise, is one of the primary ingredients of absinthe. Florence fennel or finocchio is a selection with a swollen, bulb-like stem base that is used as a vegetable. Fennel is used as a food plant by the larvae of some Lepidoptera species including in its native range the mouse moth and the Old-World swallowtail. Where it has been introduced in North America it may be used by the anise swallowtail.

The word "fennel" developed from the Middle English fenel or fenyl. This came from the Old English fenol or finol, which in turn came from the Latin feniculum or foeniculum, the diminutive of fenum or faenum, meaning "hay". The Latin word for the plant was ferula, which is now used as the genus name of a related plant.

The Greek name for fennel is marathon or marathos, and the place of the famous battle of Marathon literally means a plain with fennel. The word is first attested in Mycenaean Linear B form as ma-ra-tu-wo. As Old English finule, fennel is one of the nine plants invoked in the pagan Anglo-Saxon Nine Herbs Charm, recorded in the 10th century. In the 15th century, Portuguese settlers on Madeira noticed the abundance of wild fennel, and used the Portuguese word funcho (fennel) and the suffix -al to form the name of a new town, Funchal.

Fennel, Foeniculum vulgare, is a perennial herb. It is erect, glaucous green, and grows to heights of up to 2.5 m, with hollow stems. The leaves grow up to 40 cm long; they are finely dissected, with the ultimate segments filiform (threadlike), about 0.5 mm wide. (Its leaves are similar to those of dill, but thinner.) The flowers are produced in terminal compound umbels 5–15 cm wide, each umbel section having 20–50 tiny yellow flowers on short pedicels. The fruit is a dry seed from 4–10 mm long, half as wide or less, and grooved.

A 100-gram portion of fennel seeds provides 1,440 kilojoules (345 kilocalories) of food energy, and it is a rich source (more than 19% of the Daily Value, DV) of protein, dietary fiber, B vitamins and several dietary minerals, especially calcium, iron, magnesium and manganese, all of which exceed 100% DV (table). Fennel seeds are 52% carbohydrates, 15% fat, 40% dietary fiber, 16% protein and 9% water.

As grouped by the United Nations Food and Agriculture Organization, production data for fennel are combined with similar spices – anise, star anise, and coriander. In 2014, India produced 60% of the world total of fennel, with China and Bulgaria as leading secondary producers.