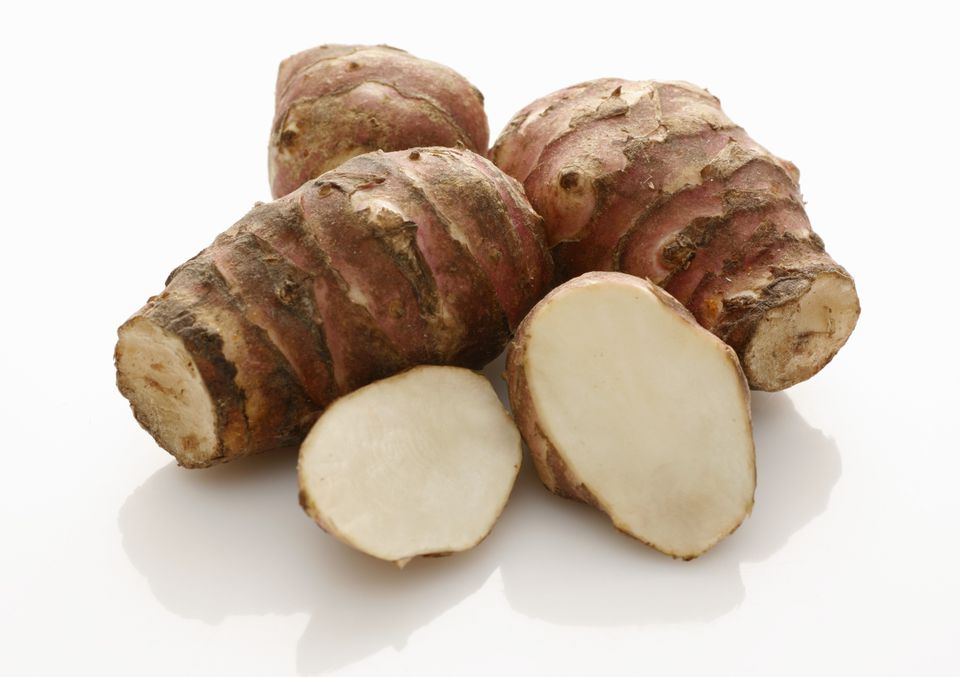 
The Jerusalem artichoke, also called sunroot, sunchoke, earth apple, or topinambour, is a species of sunflower native to eastern North America, and found from eastern Canada and Maine west to North Dakota, and south to northern Florida and Texas. It is also cultivated widely across the temperate zone for its tuber, which is used as a root vegetable.Despite one of its names, the Jerusalem artichoke has no relationship to Jerusalem, and it is not a type of artichoke, though the two are distantly related as members of the daisy family. The origin of the "Jerusalem" part of the name is uncertain. Italian settlers in the United States called the plant girasole, the Italian word for sunflower, because of its familial relationship to the garden sunflower (both plants are members of the genus Helianthus).

Helianthus tuberosus is a herbaceous perennial plant growing to 1.5–3 m (4 ft 11 in–9 ft 10 in) tall with opposite leaves on the upper part of the stem but alternate below. The leaves have a rough, hairy texture. Larger leaves on the lower stem are broad ovoid-acute and can be up to 30 cm (12 in) long. Leaves higher on the stem are smaller and narrower. The flowers are yellow and produced in capitate flowerheads, which are 5–10 cm (2.0–3.9 in) in diameter, with 10–20 ray florets and 60 or more small disc florets. The tubers are elongated and uneven, typically 7.5–10 cm (3.0–3.9 in) long and 3–5 cm (1.2–2.0 in) thick, and vaguely resembling ginger root in appearance, with a crisp texture when raw. They vary in colour from pale brown to white, red, or purple.

Jerusalem artichokes were first cultivated by the Native Americans long before the arrival of the Europeans; this extensive cultivation obscures the exact native range of the species. The French explorer Samuel de Champlain discovered that the Native people of Nauset Harbor in Massachusetts had cultivated roots that tasted like artichoke. The following year, Champlain returned to the same area to discover that the roots had a flavour similar to chard and was responsible for bringing the plant back to France. Some time later, Petrus Hondius, a Dutch botanist planted a shrivelled

The French explorer and Acadia’s first historian, Marc Lescarbot, described Jerusalem artichokes as being “as big as turnips or truffles”, suitable for eating and taste "like chards, but more pleasant.” In 1629, English herbalist and botanist, John Parkinson, wrote that the widely grown Jerusalem artichoke had become very common and cheap in London, so much so “that even the most vulgar begin to despise them.” In contrast, when Jerusalem artichokes first arrived in England, the tubers were "dainties for the Queen". They have also been called the "Canadian truffle". In France, they are associated, along with rutabagas, with the deprivations of the years of Nazi occupation during World War II, where the rationing and scarcity of traditional foods made them a regular part of the French diet until at the end of the war, they returned to their customary role as animal feed.

Jerusalem artichokes have 650 mg potassium per 1 cup (150g) serving. They are also high in iron, and contain 10-12% of the US RDA of fiber, niacin, thiamine, phosphorus, and copper.