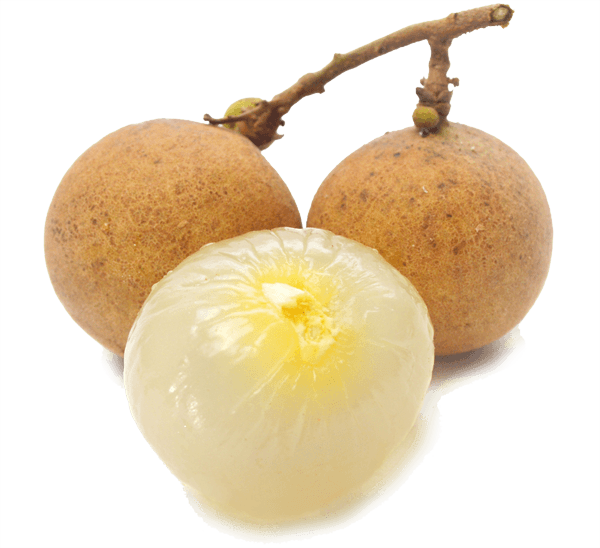 
Dimocarpus longan, commonly known as the longan, is a tropical tree that produces edible fruit. It is one of the better-known tropical members of the soapberry family (Sapindaceae), to which the lychee also belongs. Included in the soapberry family are the lychee, rambutan, guarana, korlan, pitomba, Spanish lime and ackee. Longan is commonly associated with lychee, which is similar in structure but more aromatic in taste. It is native to Southern Asia. The longan (from Cantonese lùhng-ngáahn 龍眼, literally "dragon eye"), is so named because it resembles an eyeball when its fruit is shelled (the black seed shows through the translucent flesh like a pupil/iris). The seed is small, round and hard, and of an enamel-like, lacquered black. The fully ripened, freshly harvested fruit has a bark-like shell, thin, and firm, making the fruit easy to peel by squeezing the pulp out as if one is "cracking" a sunflower seed. When the shell has more moisture content and is more tender, the fruit becomes less convenient to shell. The tenderness of the shell varies due to either premature harvest, variety, weather conditions, or transport/storage conditions.

The longan is believed to originate from the mountain range between Myanmar and southern China. Other reported origins include India, Sri Lanka, upper Myanmar, north Thailand, Kampuchea (more commonly known as Cambodia), north Vietnam and New Guinea. Its earliest record of existence draws back to the Han Dynasty in 200 BC. The emperor had demanded lychee and longan trees to be planted in his palace gardens in Shaanxi, but the plants failed. Fortunately, four hundred years later, longan trees flourished in other parts of China like Fujian and Guangdong, where longan production soon became an industry. Later on, due to immigration and the growing demand for nostalgic foods, the longan tree was officially introduced to Australia in the mid-1800s, Thailand in the late-1800s, and Hawaii and Florida in the 1900s. The warm, sandy-soiled conditions allowed for the easy growth of longan trees. This jump-started the longan industry in these locations. Despite its long success in China, the longan is considered to be a relatively new fruit to the world. It has only been acknowledged outside of China recently in the last 250 years. The first European acknowledgement of the fruit was recorded by Joao de Loureiro, a Jesuit botanist, in 1790. The first entry resides in his collection of works, Flora Cochinchinensis. The longan was described in Joao de Loureiro's work, Flora Cochinchinensis, published in 1790. Currently, longan crops are grown in southern China, Taiwan, northern Thailand, Malaysia, Indonesia, Cambodia, Laos, Vietnam, India, Sri Lanka, Philippines, Australia, U.S., and Mauritius.

It is found commonly in most of Asia, primarily in China, Taiwan, Vietnam and Thailand. China, the main longan-producing country in the world, produced about 1,300 million tonnes of longan in 2010. Vietnam and Thailand had produced around 600 million and 500 million tonnes, respectively. Like Vietnam, Thailand's economy relies heavily on the cultivation and shipments of longan as well as lychee. This increase in the production of longan reflects recent interest in exotic fruits in other parts of the world. However, the majority of the demand comes from Asian communities in North America, Europe and Australia. The longan industry is very new in North America and Australia. Commercial crops have only been around for twenty years. In Florida, the small quantity produced are sold only at local farmer's markets. In Australia, the crops are much bigger, stretching along the northern and eastern coasts. The weather is much better suited for longan growth. During harvest, pickers must climb ladders to carefully remove branches of fruit from longan trees. It has been found that longan fruit remain fresher when still attached to the branch, so efforts are made to prevent the fruit from detaching too early. Mechanical picking would damage the delicate skin of the fruit, so the preferred method is to harvest by hand. Knives and scissors are the most commonly used tools. It is also encouraged to pick the fruit earlier in the day in order to "minimize water loss" as well as prevent high heat exposure, which would be damaging. The fruit is then carefully placed into either plastic crates or bamboo baskets and taken to packaging houses, where the fruit undergo a series of checks for standards. The packaging houses are well-ventilated and shaded to prevent further decay. The process of checking and sorting are performed by workers instead of machinery. Any fruit that are split, under ripe, or decaying are disposed of. The remaining healthy fruit are then prepped and shipped to markets. In terms of distribution, many companies add preservatives and chemicals to canned longan. These chemicals have been popularly known to, though not yet officially proven, cause unpleasant sensations such as burning lips, tingling of the mouth and tongue, and poor digestion. Due to these discoveries, more regulations have been made to control the preserving process. So far, the only known chemical added to canned longan is sulfur dioxide to prevent discoloration. There have been no studies to ascertain whether it has harmful effects on consumers. Use of chemicals is not limited only to canned longan. Fresh longan that is shipped worldwide is exposed to sulfur fumigation. Tests have shown that sulfur residues remain on the fruit skin, branches, and leaves for a few weeks. This violates many countries' limits on fumigation residue, but efforts have been made to reduce this amount. Potassium chlorate has been found to cause the longan tree to blossom. However, this causes stress on the tree if it is used excessively, and eventually kills it.