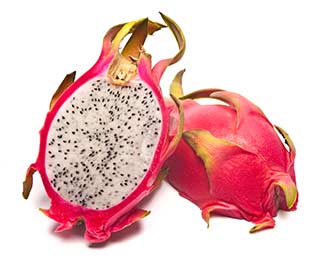 
A pitaya is the fruit of several cactus species indigenous to the Americas. Pitaya usually refers to fruit of the genus Stenocereus, while pitahaya or dragon fruit refers to fruit of the genus Hylocereus. These fruits are commonly known in English as "dragon fruit", reflecting its vernacular Asian names. The names pitahaya and pitaya derive from Mexico, and pitaya roja in Central America and northern South America, possibly relating to pitahaya for names of tall cacti species with flowering fruit. Pitahaya-producing cacti of the genus Hylocereus are originally native to Mexico. They were transplanted to Central America, probably by Europeans. They are cultivated in Southeast Asia, the United States, Israel, Australia, Cyprus, and the Canary Islands.

Stenocereus fruit are a variety that is commonly eaten in the arid regions of the Americas. They are more sour and refreshing, with juicier flesh and a stronger taste. The sour pitaya or pitaya agria in the Sonoran Desert has been an important food source for indigenous peoples of the Americas. The Seri people of northwestern Mexico still harvest the fruit, and call the plant ziix is ccapxl "thing whose fruit is sour". The fruit of related species, such as S. queretaroensis and the dagger cactus , are also locally important foods. The fruit of the organ pipe cactus is the pitaya dulce "sweet pitaya". It still has a more tart aroma than Hylocereus fruit, described as somewhat reminiscent of watermelon; it has some uses in traditional medicine. Fruits of some other columnar cacti are also called "pitayas" – for example those of the Peruvian apple cactus, which are very rare.

The fruit's texture is sometimes likened to that of the kiwifruit because of its black, crunchy seeds. The flesh is mildly sweet and low in calories. The seeds have a nutty taste and are rich in lipids. Dragon fruit is also used to flavor (and color) juices and alcoholic beverages, such as "Dragon's Blood Punch" and the "Dragotini". The flowers can be eaten or steeped as tea. The red and purple colors of Hylocereus fruits are due to betacyanins, a family of pigments that includes betanin, the same substance that gives beets, Swiss chard, and amaranth their red color.