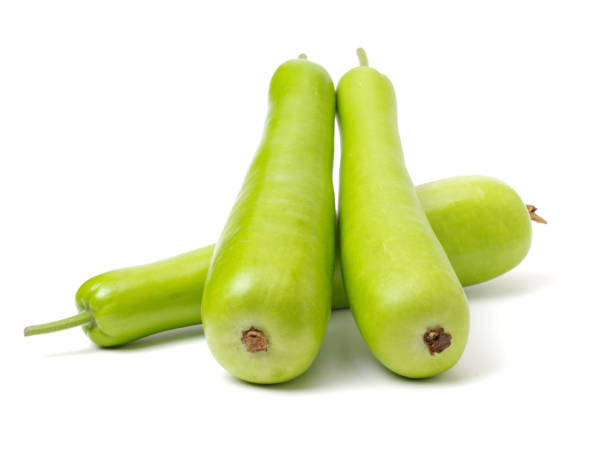 
A calabash, bottle gourd, or white-flowered gourd, Lagenaria siceraria, also known by many other names, including long melon, New Guinea bean and Tasmania bean, is a vine grown for its fruit, which can be either harvested young to be consumed as a vegetable, or harvested mature to be dried and used as a utensil. When it is fresh, the fruit has a light green smooth skin and white flesh. Calabash fruits have a variety of shapes: they can be huge and rounded, small and bottle shaped, or slim and serpentine, and they can grow to be over a metre long. Rounder varieties are typically called calabash gourds. The gourd was one of the world's first cultivated plants grown not primarily for food, but for use as containers. The bottle gourd may have been carried from Africa to Asia, Europe, and the Americas in the course of human migration, or by seeds floating across the oceans inside the gourd. It has been proven to have existed in the New World prior to the arrival of Christopher Columbus. Because bottle gourds are also called "calabashes", they are sometimes confused with the hard, hollow fruits of the unrelated calabash tree, Crescentia cujete, whose fruits are also used to make utensils, containers, and musical instruments.

The bottle gourd is a commonly cultivated plant in tropical and subtropical areas of the world, now believed by some to have spread or originated from wild populations in southern Africa. Stands of L. siceraria, which may be source plants and not merely domesticated stands, were reported in Zimbabwe in 2004. This apparent domestication source plant produces thinner-walled fruit that, when dried, would not endure the rigors of use on long journeys as a water container. Today's gourd may owe its tough, waterproof wall to selection pressures over its long history of domestication.

Like other members of the Cucurbitaceae family, gourds contain cucurbitacins that are known to be cytotoxic at a high concentration. The tetracyclic triterpenoid cucurbitacins present in fruits and vegetables of the cucumber family are responsible for the bitter taste, and could cause stomach ulcers. In extreme cases, people have died from drinking the juice of gourds. The toxic cases are usually due to the gourd being used to make juice, which the drinkers described as being unusually bitter. In the three lethal cases, the victims were all diabetics in their 50s and 60s. However, the plant is not normally toxic when eaten and is safe to consume. The excessively bitter (and toxic) gourds are due to improper storage (temperature swings or high temperature) and over-ripening.

In Central America, the seeds of the bottle gourd are toasted and ground with other ingredients (including rice, cinnamon, and allspice) to make the drink horchata. (The calabash tree, Crescentia cujete, is known locally as morro or jícaro; it is another type of "calabash"). In Colombia and Venezuela, the calabash tree is known as a taparo or totumo (it is also another kind of "calabash" plant).

The calabash is frequently used in southern Chinese cuisine in either a stir-fry dish or a soup. The Mandarin name for calabash is hulu (simplified Chinese: 葫芦; traditional Chinese: 葫蘆; pinyin: húlu) or huzi (Chinese: 葫子; pinyin: húzi). Two common kinds of calabash are sold in Chinese stores: the opo , which is elongated but still plump, and the mao gua which translates to "hairy squash". It is very similar to opo, but it has hairs, as its Chinese name references. The hairs, although small, can become embedded in the skin, but it is usually safe for adults to handle.